It's been a heck of a last 3 months but hubby is up and back at work half time now. Thank you for all the encouragement you've given me since the last blog and I'm happy to be back to work myself!


I started this quilt last August before we left for Ukraine, I just never had time to show you what I was working on after I finished The Perfect Nanny (Mary Poppins). By the way, I sent it off to the National Quilt Museum where it will be part of their traveling exhibition for the next 2 years. Maybe you'll be able to go to an AQS show and see this added exhibit?

On to my new quilt -

Years ago I was able to spend one day (one day! only!) at the southern rim of the Grand Canyon. Ted and I walked along the rim trail at dusk and then sunset. I found a good place to take some photographs and the photo above was taken just as the sun was setting and the rays highlighted the canyon formations. The light was just right and the rocks glowed and turned red.

I knew I would one day make this scene into a quilt so the first thing I did was crop the photo.
This is a 'rough draft' of my photo and I had this much on my design wall before we left for Europe in September -
When I started back to work on this quilt I had a few problems... first was that I was out of room on my design wall so a lot of my strips were bunched and hidden. The second was more complicated - I didn't like the lack of depth or the lack of 'edges' in my rock formations. If you look at this (above) pic and then compare it to the photo, you'll see what I mean. The main bluff shape looked like a breast and it lacked dimension.  Third - I didn't think the sky looked right.

The first thing I needed to do is adapt my basic pattern and draw more specific shapes into the bluffs.

Ok... This is what you are looking at above. It's the bottom half of my canyon partially pieced. You'll notice the long horizontal fold/sew lines that I drew using my cutting mat and ruler and a pen. I wanted two 3/4 and one 1/4 inch finished strips so when I drew those long lines I drew 1-1/4 inch, 1-1/4 inch and then 3/4 inch widths. My landscape is 60 inches wide by the way.


Now, I'm going to glue strips of fabric between these lines. Then I'll fold along each of those long lines and stitch 1/4 inch from the edge of the fold, with me?! (See book, lol).  Because of the precise nature of this landscape, I had to take that 1/4 inch seam allowance into account as I created each bluff/crevice.

Here is a closeup of the top of the main formation.
You can't imagine how hard it would be to piece this precisely using traditional piecing methods. (And I kind of hate piecing anyway!! Shame on me, I know. Still, for me piecing is the boring part of making a quilt...)

So, I fold under edges and applique complicated strip segments - I'll show you.
When sewing or putting two different strips of fabric together, one strip is always on top and one on the bottom. This is the same with sewing the angles together; look at the seam, it's always pressed one way or the other. So, as I designed each bluff/crevice I glued down the center of the strips of fabric which would be on top and then I turned under the edges of that strip and glued the angle in place using a simple glue stick.

I glued the edge of the top strip under so it wouldn't be raw edge and trimmed off the excess fabric. Then I glued that top angle to the strip beneath it.

Clear as mud?
I could peak and lift up the background strip (the burgundy one on the right) to make sure I had folded the angle correctly and placed it correctly on top. Remember, the seam allowance of the top strip's angled edge is glued under so it is not a raw edge. The burgundy edge is a raw edge but it will be tucked under the lighter bluff strip so that won't matter. Once I had the strips exactly where and how I wanted them, I glued the top strip over the background strip.

Bit by bit, I created the Mohave Point view from my photo.
Next step-
If I haven't lost you altogether by now the next thing to do is to stitch each of those glued angles to the foundation. You must do this BEFORE you fold and sew along the grid lines because these angled edges are a little stiff and they can lift up off the foundation. I stitch these down so they stay precisely where I want them to stay.


A friend suggested that I tip the sky upside down and put the darker part next to the canyon. I did so - using photo software and this is what that looked like - 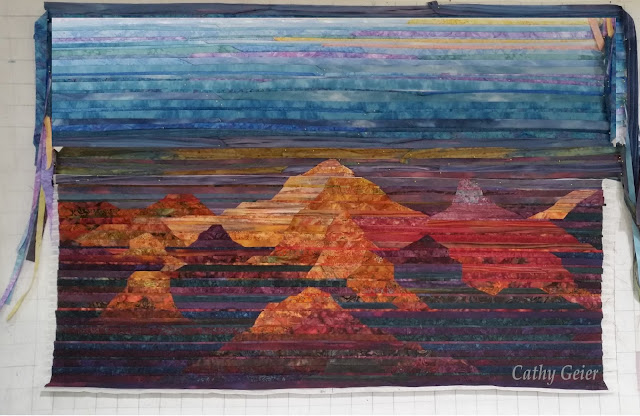 It turned out to be a helpful suggestion because it was clear that I needed darker values at the horizon line. In my photograph of the canyon, the sun is actually setting far out of the picture on the left. The sky being what it is - big - is still light in my photo but I had to express the idea that the sun is setting and casting shadows in the canyon. I reworked the sky and came up with this -
I cut another piece of foundation, drew in my grid lines, finished the top of the bluff and transferred my strip segments to the foundation. (See below.)


And here is the quilt top after I finished sewing it all together.


I needed to fix a couple of things - I had to add to the top of the grayish shadowed formation on the right. I also needed to add a narrow band of descending highlighted red rock into one of the shadowed areas on right. I fused on these pieces.
And there you have it!
It's been a complicated blog... but this was a complicated landscape.  I bought a bunch of cool thread, lots of new needles and a marking pen so I'm ready to start quilting.

Just need time.
I hope you like it! Comments welcome. 🙂
Posted by Material Girl at 10:14 AM

Email ThisBlogThis!Share to TwitterShare to FacebookShare to Pinterest
Labels: strip-pieced