Last week hubby and I took our oldest son and his fiancé to beautiful Bonaire. The waters around this little island which is just off the coast of Venezuela are an International Marine Preserve. The island is governed by the Dutch but they use US currency. You can park your rented car along the road side practically anywhere on the Eastern side of the island and tramp right out into the water and snorkel or scuba dive.  Of course you have to be very careful where you step so you don't destroy the coral.

I have a few pictures, but my son had the underwater camera so all those babies have to wait for him to process them.


Wasn't it nice that a pelican posed for my photo?


We've been there in March when the flowers were blooming and now here in October they are blooming again. I wonder if they ever stop blooming? I love the colors of the small 'villas'.
We had one somewhat rainy day - it lasted a couple of hours in the morning so we checked out the Wild Donkey Preserve. What a hoot!  Every time we stopped the car we were mobbed by smelly wet donkeys who wanted pets and carrots. We should have bought more carrots but who knew that 4 pounds weren't enough!? Lol.

There are some donkeys which run wild on the island. These two joined my future daughter-in-law as we ate breakfast at an open street bar/cafe.  Aren't they cute? (Erin, too!) 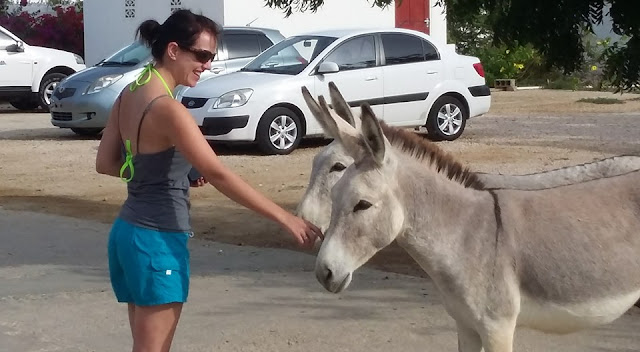 I had some fun news when I got back. A couple of months ago I gave permission to a women's ministry to use my quilt in a brochure for their conference. Last night they sent me a copy.

And the inside; so this is pretty cool. (And it looks like they are taking up a collection for a very worthy cause...) 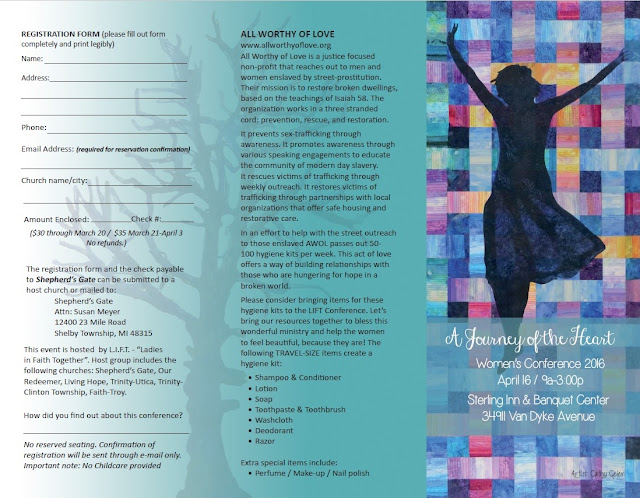 A couple of weeks ago I mentioned that instead of packing I was playing with a few fat quarters. Here is what I did to get this little scene ready for quilting.

Once I cut out enough foliage, I fused on the branches. (I don't use a glue stick adding branches, I prefer fusing them to minimize the fraying of those delicate pieces.)  I used a white marker on the top of each branch and I used the metallic Sharpie to shade the trees.

See that big thick Sharpie paint marker? I used that to add more white 'umph' to the tree trunks. I colored over the yellow portions of that print with the metallic silver and then went over that with the white. That way I could capture some of the golden leafy color on the tree trunks, but not have too much of it.

If you noticed in the photograph before the one above, the black branches just popped right out of the tree trunks. Not good. So I just added some black splotches  right under those branches.


Ok, I admit that I have never done this before and I tend to just do things to see what happens. I regret that I didn't do anything to lighten the top of the scene. I could have used up another fat quarter and added messy cut patches from the wrong side of the deep red fall print, but I didn't. Sooo, without thinking it through, I lightened the top of this quilt with my white marker by making squiggly lines around the foliage.  It worked! Sort of... the lines were a bit white. Duh.

I minimized the 'white' by just coloring over it with a golden yellow marker. Ta daa! It worked. And there you have it, a little play quilt. Eventually I'll quilt it and hang it somewhere or give it to someone.
I tried thinking about borders but couldn't. (I'll let you decide how you want to interpret that!)

This week also finds me making some sketches for a possible commission. If they choose one, it will be a big quilt - huge! (96 x 48 inches) I'm choosing the triptych form because I think the scene will look better broken up than one long quilt.
I thought you'd like to see some more quilts from the Wisconsin Quilt Expo this year. Also, the Wisconsin Quilt Museum brought their Yurt.  Isn't it fun? I took a bunch of pictures.
Here are some of the pretty panels quilters made to hang around the yurt. I love the Four Season idea! 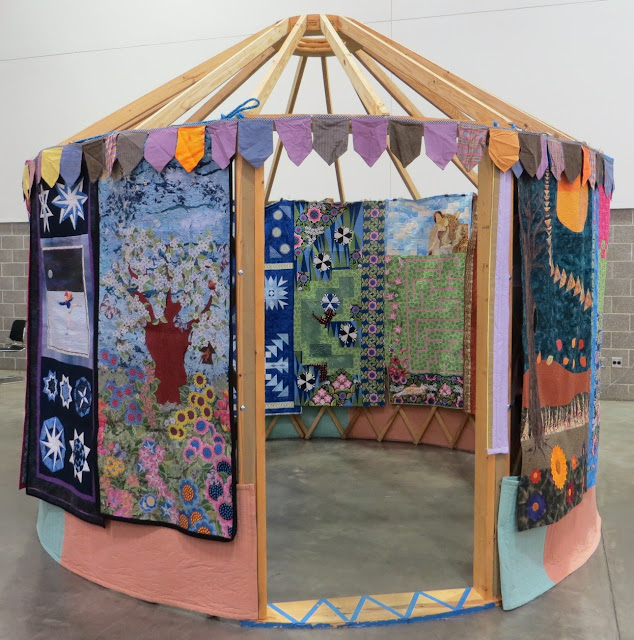 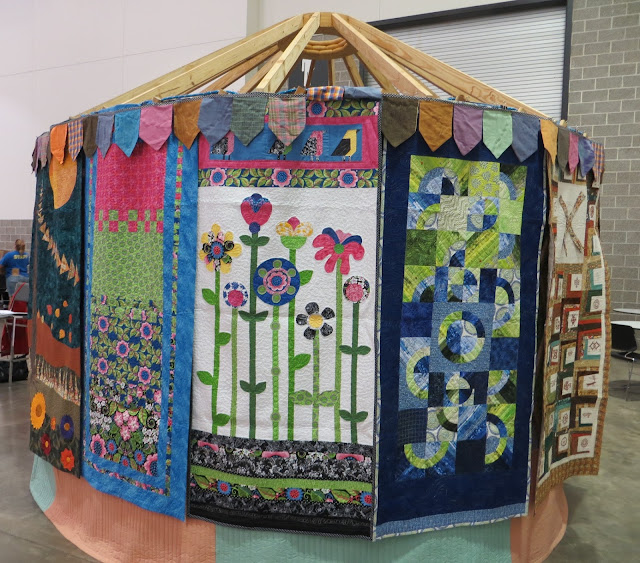 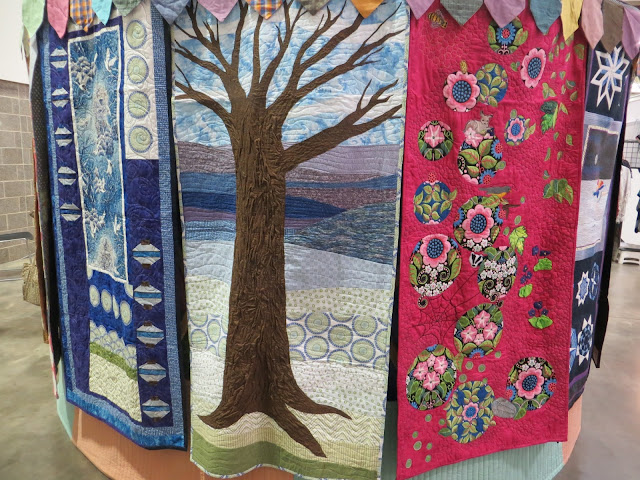 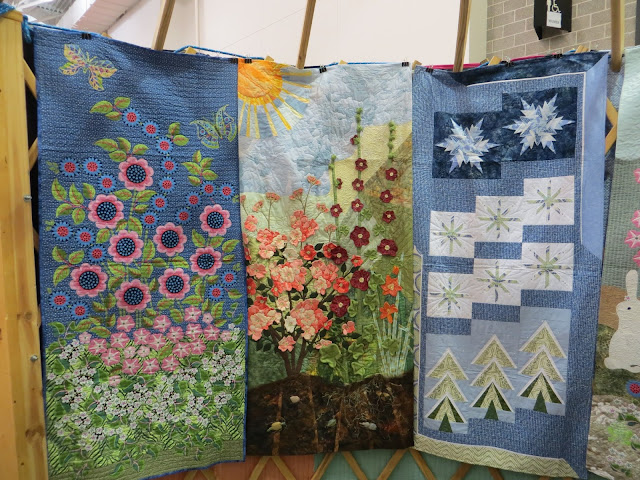 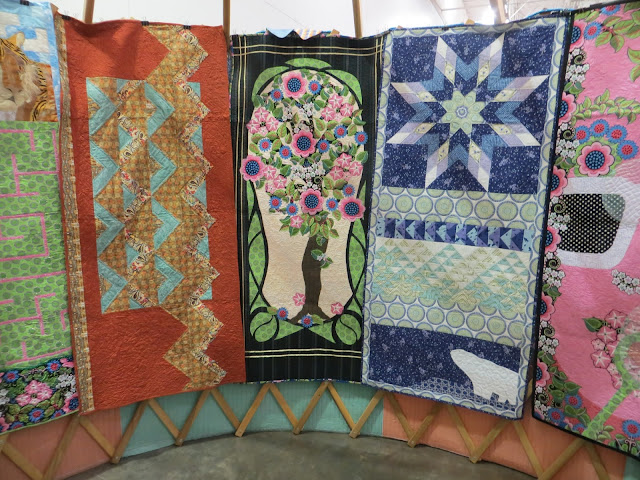 The Best of Show when to Claudia Myers and Marilyn Badger for their quilt Red Feathers.


Amazing, creative, full of new techniques - they painted after quilting in some places here, great piecing and applique. I'm so impressed with this dynamic duo. They never do the same thing twice; they push their skill level boundaries, they change up their color schemes.

I confess I'm rather bored seeing the same few people doing the same thing only in different colors of silk as they slightly vary their quilting.  Frankly I think judges need to give more emphasis to originality and not technical quilting stitch perfection.  (And I think professional long armers need to compete in separate categories and not with the rest of us, lol.)

But I digress...  Claudia and Marilyn deserve major accolades. By the way, in an earlier blog I mentioned that I'm bored with seeing quilted feathers on everything. This close-up shot is NOT what I was referring to.


Isn't this great!?
This is another quilt I liked from Expo.
And here is a closeup of the quilting. Nice yes? And no feathers.

Alright, I'll quit being snarky.
And Lastly... Benedict! I love the Sherlock series. And he made a great dragon in the Hobbit movies.


Here is a detail of his face. Enjoy!
I thought you all might be interested in learning more about this quilt and the quilter so here is the label that hung with the quilt.
And lastly... we've all seen the memes with handsome actors telling us how much they:


b. don't mind our messes
c. are fine with stepping on pins
d. that they know the difference between fabric and paper scissors
e. that they like rubbing our backs while we quilt
f. that they don't need dining rooms, etc.

Well I made this one last year but never posted it... maybe it is too much? Lol, but we don't have to mean it that way.

Posted by Material Girl at 8:42 AM